I have been in the D.C. area for a few years and have had the fortune to work with many people in the rapidly growing Tableau community here. From government to higher education, I have been able to help some prestigious organizations do more with their data. The InterWorks D.C. team and I have also gotten very involved in the D.C. Tableau User Group – a monthly meeting for Tableau users in the area.

From what I’ve seen over the past few years, the growth of Tableau in D.C. has been astounding. It makes perfect sense that Tableau would choose D.C. as one their office locations outside of Seattle. There’s an insatiable appetite for data visualization here!

As organizations grow in their use of Tableau, I have seen one particular area become the lynch pin for success in its adoption: Tableau Server performance.

Last year, InterWorks started organizing server workshops in several cities where Tableau is used the most. I was responsible for leading the D.C. Server workshop hosted by InterWorks. During that workshop, I was able to gather feedback from the Tableau Server thought leaders in D.C.

Once again, the workshop confirmed what I’ve been seeing over years of consulting with organizations on how to effectively build and grow their use of Tableau. The unanimous feedback from attendees was that server performance was their number one challenge.

The good news is that, at the time, the development team at InterWorks was already working on a brand-new solution for server performance. They were planning the big unveiling to take place at the 2016 Tableau Conference in Austin (which was just a few months after this D.C. Server workshop). That solution is now known as Power Tools for Tableau: Server.

As an intermediary, I was able to bring back some of the insights to the InterWorks development team and was also able to share with the workshop attendees that help was on the way. One of the workshop attendees was in desperate need of insights on server performance. He was leading the BI group for one of the largest medical research organizations in the United States, which takes us to our brief use case.

The client had been running into some crippling server challenges and answers were often delayed by hours or days because it was so difficult to compile a comprehensive perspective. In order to narrow things down, they needed to be able to see how resource challenges were tied to both the hardware and software involved on their servers.

They needed to see performance stats in real time as well as the ability to go back and look across all the factors at play when an incident occurred. This might include things like a really slow load time for a particular report or an extract failure. As timing would have it, I was able to show one of the earliest versions of Power Tools: Server. Not only was it helpful for incident troubleshooting, but it also gave lots of insight into capacity planning and governance. 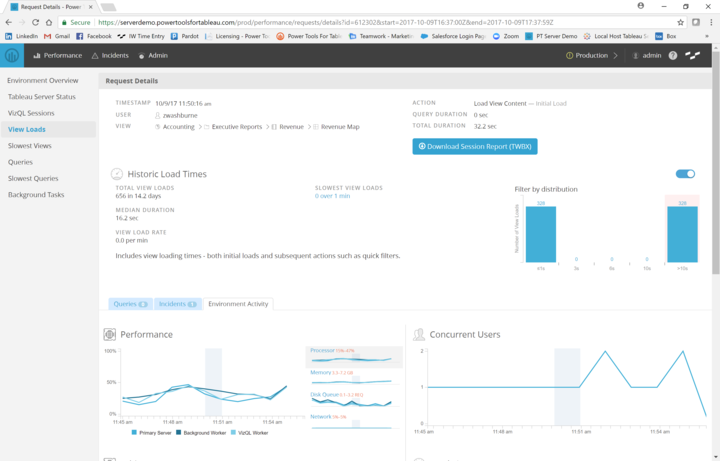 Another new advantage for the client was the ability to set up alerts and receive notifications when specific performance thresholds were encountered by a user. This would ensure that these issues could be addressed immediately and the experience of certain users could be monitored on a regular basis. Tableau Server does natively provide some insights in their admin views, but Power Tools: Server takes everything to the next level with all of these additional features.

Over time, I have seen organizations grow their use of Tableau at a different pace. Though they often grow it in different ways, there are common threads in every organization. Probably the biggest one of all is this topic of server performance. That’s why I’m excited about the impact that Power Tools: Server can have for such clients. I’ve already seen it at work and know it can make a difference.