The Power Tools for Tableau suite has helped countless users over the years. Power Tools: Desktop and Deployment have been around for a bit now, but Power Tools: Server is one of our newer tools. We know the benefits it can bring, and we’re now seeing different clients apply it in their Tableau Server environments.

Case in point, while at a client site this year, I witnessed a textbook use case for Power Tools: Server worth sharing. Odds are, many readers of this post share similar challenges, so hopefully this demonstrates how Power Tools: Server can make a big impact.

It Started with a Server Health Check

InterWorks has had a relationship with this client for quite some time, and the client called upon us to do a routine Server health check. During these health checks, we monitor Server performance and note any irregularities or inefficiencies then set to troubleshooting them.

The results found that the client had several poorly designed workbooks making their way into the production environment. Hundreds of people were hitting these workbooks within the same hour, and some were taking up to 45 seconds to load. This was obviously a problem. The client needed a way to wrap their arms around how many workbooks weren’t performing well and pinpoint the reasons for their poor performance.

Once the client understood the reasons behind the performance issues, they could both resolve them and make better decisions about the number of users they could effectively support with their current infrastructure. The challenge now was how to make those discoveries.

Diagnosing performance issues is generally a tedious, trial-by-error process. In this case, I had a pretty good notion of what was going on. The client wasn’t capturing CPU usage from their Server. They were refreshing extracts throughout the day and there was a decent chance the culprit was their backgrounder. Still, I wanted to prove definitively what was driving these issues.

Using Power Tools: Server, I was able to tell in matter of minutes, all on one screen, that those background processes were happening at the same time they were experiencing slow load times. These processes were running on the same Server that they were serving up visualizations on.

To show this definitively, I still needed the data behind it (but it wasn’t being captured at the time). Power Tools: Server came in handy again, allowing me to line up CPU performance with the backgrounder to show utilization percentages for each at any given point in time. This was all found right in the Environment Overview screen. You don’t have to switch tools and you don’t have to go pull the logs so the identification of the real issue is as quick as it possibly can be.

Above: The Environment Overview dashboard in Power Tools: Server.

For the sake of comparison, if I tried to diagnose this scenario without Power Tools: Server, I would have needed to run Windows Performance Monitor (PerfMon) to collect the statistics for CPU/hard disk/memory over the course of a couple of days. I would then have to compare the usage for each of the processes. Once that was set up, I’d have to match each process with what was running at the time, which would take additional collection from the Tabadmin views in Tableau Server.

Additionally, PerfMon is not easy to use and creates the logs in the background so you’re not seeing what’s going on in real time. It is often not utilized until after normal production hours because it is a heavy process. This creates an additional lag to this identification process.

From the client perspective, Power Tools: Server gave them confidence that they could now get a more timely and accurate understanding of Server usage across their infrastructure. In addition to seeing an overview of the whole environment at one time, they were excited to see the alerts capabilities so they could be notified right away.

Any slow views are also logged in the Incidents section. This makes it easy to get a comprehensive look at what was happening on both the hardware and software at the time that the incident took place. If both the hardware and software weren’t the cause of the issue, they knew the issue likely centered around workbook design. This is where Power Tools: Desktop provided some insights to the developers of the workbooks. The Performance Analyzer tool gave them a very detailed look at all the different loading events at the workbook level.

All in all, Power Tools: Server has saved this client invaluable time and effort. Instead of taking days or weeks, Server performance issues were pinpointed in a matter of minutes. With a little help from Power Tools: Desktop, even their workbook design issues were quickly identified and resolved. 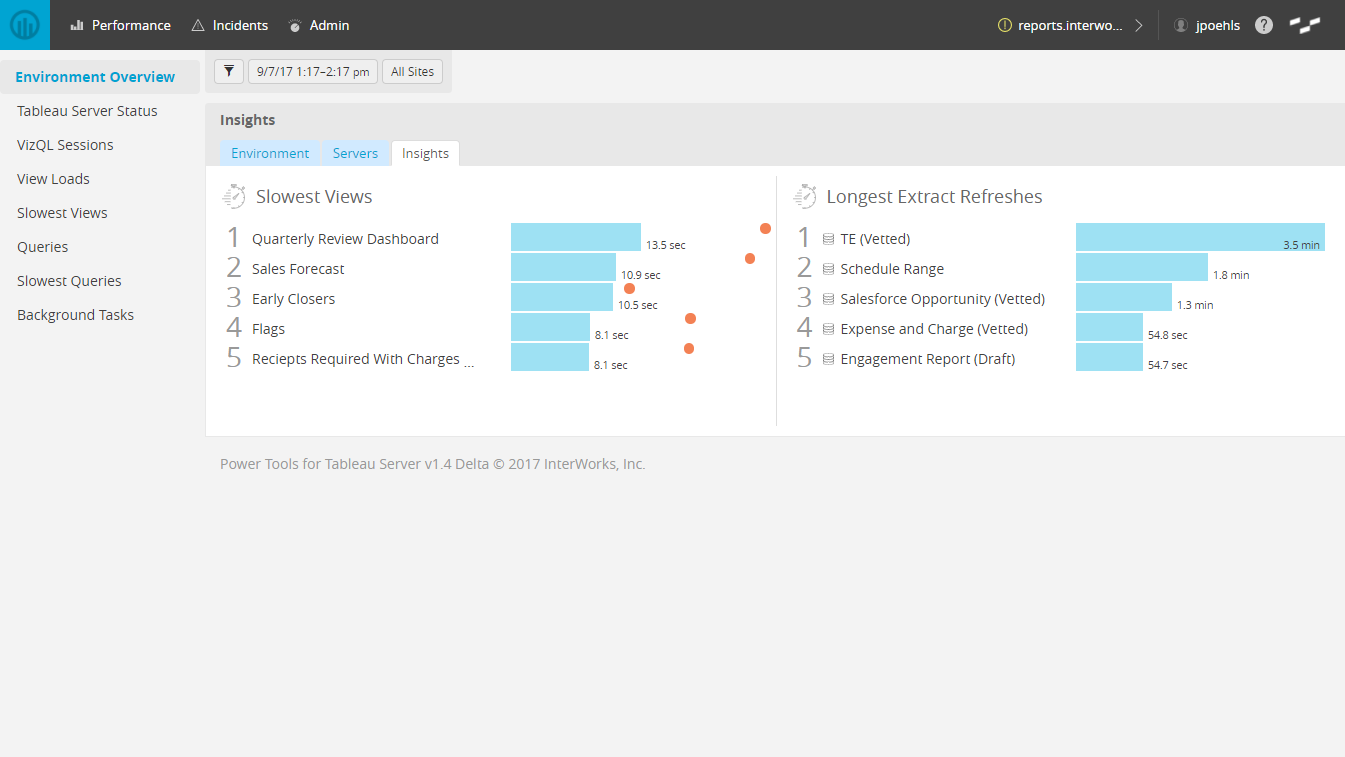 Above: Insights tab in the Environment Overview dashboard.

Want to learn more about how Power Tools: Server can help in your environment? Learn more here, then get in touch with us today to schedule a demo!