I’ve been a consultant at InterWorks Europe for some time now, and it’s been great to learn about all the new services and tools that InterWorks offers. It’s interesting to note, however, that I was using Power Tools for Tableau as client before I came to InterWorks. I continue to use it for a number of clients, but I have a unique perspective as someone who understands the impact that these tools can have for a client.

Before InterWorks, I worked at CACI in London (read a full case study here). As the analytics lead there, I was involved in the initial decision to bring Tableau to CACI. As we grew in our use of Tableau, I was also responsible for working through the challenges that arose from more and more clients depending on Tableau reports. One of these challenges involved what to do with our deployments.

The Challenge of Building Internally

In those cases, the guy who developed the solution became the single point of maintenance/support for the tool. If he walked out the door, then it would be difficult to have someone else step in to help with fixes or updates. That was not only difficult for addressing one-off issues, it was not a good plan for long-term issues either.

Beyond issues associated with supporting a tool that was built internally, there were additional factors at play. CACI works with a lot of banks and is audited regularly. It’s very important to show processes are not prone to error (as in the case of doing manual deployments or using some code that was just hacked together for deployments).

When our process got to the point where it was taking them a few weeks to go through and make updates to their 20 or 30 workbooks, we realized that it was time to figure out a solution. There was no way for us to scale our use of Tableau if that was going to continue.

Power Tools: Deployment to the Rescue!

Shortly after we explored these challenges, I had a call with Zion Spencer and discussed the capabilities of Power Tools for Tableau: Deployment. I quickly saw that using an established and supported tool was the way to go.

To give you an idea of our environment, we were working with seven sites at the time with about 15 workbooks per site. Our goal was to scale it up to 20~ sites (with at least 30 workbooks per site). I realized that Power Tools: Deployment was the only supported tool that would enable us to achieve this. The only other option was to have someone doing as their full-time job. That wasn’t going to be as cost effective and would be prone to manual errors.

I started the trial of the Power Tools: Deployment and immediately started configuring deployment plans. These plans contained a series of steps that could be automated start to finish. One of the biggest time savers was configuring data source connection changes (this included changing the password for the SQL connection).

We were able to set up successfully the structure that would be carried over across to the various phases of the project laying out the foundation which would save us lots of days trying to promote content to production. We have also documented the process and the logs generated by Power Tools: Deployment were a great asset for auditing. 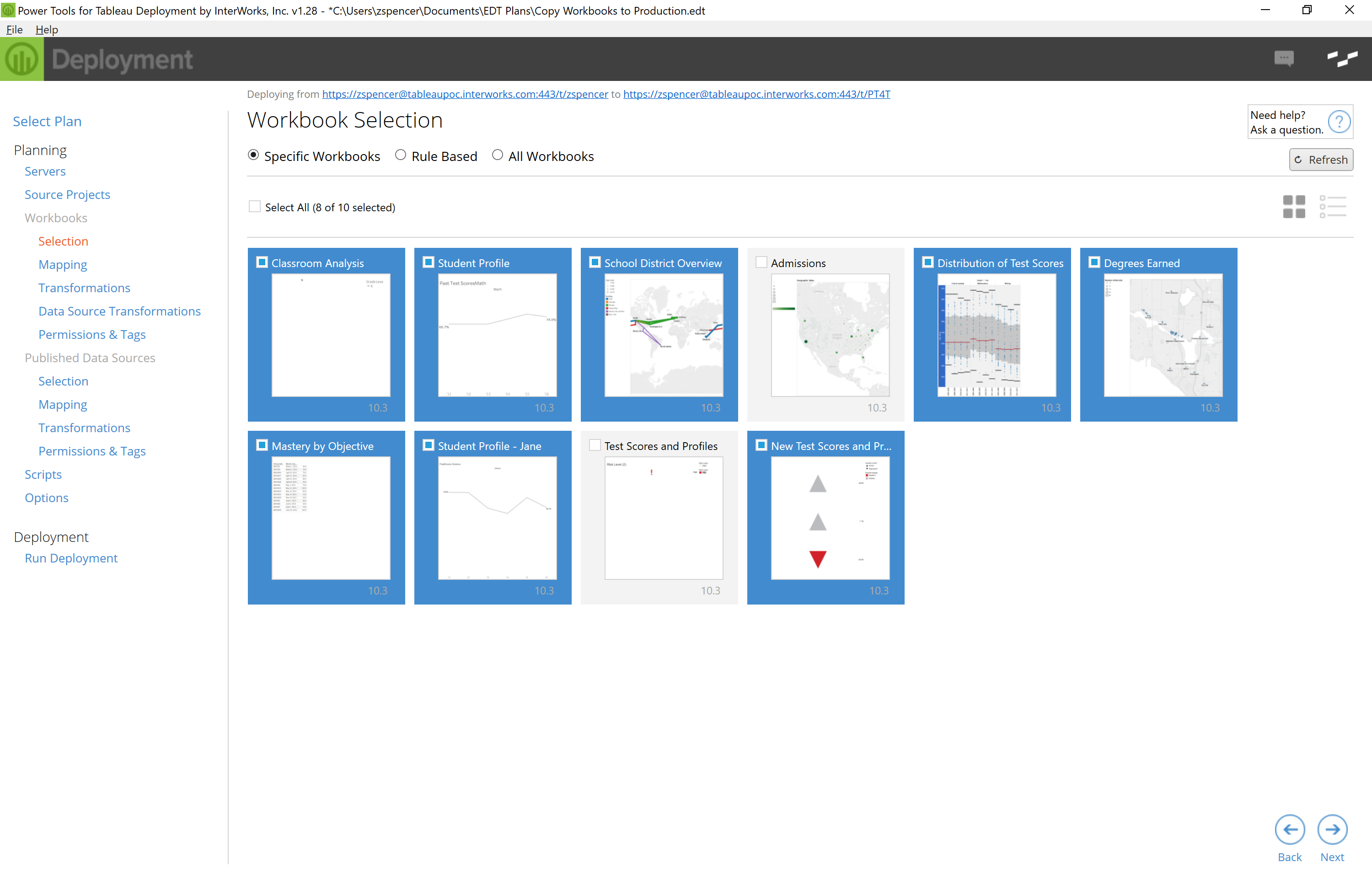 Above: The Workbook Selection screen in Power Tools: Deployment.

After months of using the tool, I had an opportunity to transition from my role at CACI to InterWorks. When that happened, it was very simple to turn over this structured plan to the next person who was responsible for carrying out those same tasks. Without Power Tools: Deployment, that could have potentially been a very difficult scenario for CACI.